Give your Customers that warm & fuzzy feeling with custom printed With Compliments with your hand written personal message on them.

Jett Print With Compliment Slips come in a standard size of DL (99 x 210 mm) and are printed full colour 1 side on 100 gsm White Bond. 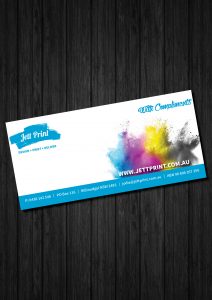 A with compliments slip (or with compliments slip) is a slip of paper that contains the same name and address information that would be on a letterhead of formal letter stationery, the pre-printed salutation “with compliments” or “with our/my compliments”, and space afterwards for a short handwritten message to be added.[1][2][3][4] It is used in correspondence, as an enclosure for other material.[3]

With Compliments slips, which are informal, can sometimes substitute for more formal letters of reply.[3] For example, the response to a request for a product catalogue or a price list may simply be the price list or catalogue, with a with compliments slip attached, rather than with a formal letter of reply.[4][5] The inclusion of compliments slips in responses to such routine requests is often seen by businesses as a necessary step in maintaining good public relations.[3]

Since they are informal, with compliments slips are not substitutes in those cases where a formal letter is required for legal reasons. In building contract work, for example, a drawing or a copy letter sent to a contractor with a compliments slip attached is not a formal instruction to perform the work on the drawing or letter. It is at most an invitation to perform that work, at no charge to the employer. A valid instruction would be a formal letter of instruction, or an instruction provided on a printed “Architect’s Instruction” form (signed by the architect).[9]

1 review for With Compliments