Whether you’re having a Birthday, a Baby Shower or even a Christmas Party, Jett Print can design & print your invitations for you.

Our Invitations are printed in Full Colour 1 or 2 sides on a quality 300 Gsm Card. 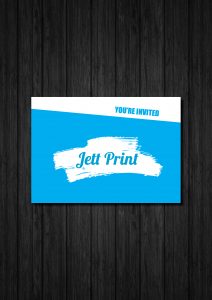 Grab people’s attention! Whether you’re having a wedding, Bar Mitzvah or holiday party, you want to put your best foot forward. With Jett Print invitations and announcements you can print professional Invitations. Choose a design that’s funny, trendy, chic or simple. Or let us create your own design from scratch. Invitations come in all shapes & sizes. All products are printed with Jett print’s  vibrant full-colour process and include full-bleed, two-sided printing and envelopes. And they ship within 24 hours. So celebrate with Jett Print’s birth announcements, grad announcements or Save the Date cards and wait for the RSVP landslide. All types of invitations: wedding invitations, birthday invitations, baby shower invitations.

Bring a smile to someone special with Jett Print’s range of bright and cheery invitations and cards. Let us create a unique card or invitation using our designer paper and invitation boards, paper, tools and embellishments.

A wedding invitation is a letter asking the recipient to attend a wedding. It is typically written in formal, third-person language and mailed five to eight weeks before the wedding date.

Like any other invitation, it is the privilege and duty of the host—historically, for younger brides in Western culture, the mother of the bride, on behalf of the bride’s family—to issue invitations, either by sending them herself or causing them to be sent, either by enlisting the help of relatives, friends, or her social secretary to select the guest list and address envelopes, or by hiring a service. With computer technology, some are able to print directly on envelopes from a guest list using a mail merge with word processing and spreadsheet software.

History
The Middle Ages and before

Prior to the invention of the moveable-type printing press by Johannes Gutenberg in 1447, weddings in England were typically announced by means of a Town crier: a man who would walk through the streets announcing in a loud voice the news of the day. Traditionally, anyone within earshot became part of the celebration.

In the Middle Ages, illiteracy was widespread, so the practice of sending written wedding invitations emerged among the nobility. Families of means would commission monks, skilled in the art of Calligraphy, to hand-craft their notices.

Such documents often carried the Coat of arms, or personal crest, of the individual and were sealed with wax.
From 1600 onward

Despite the emergence of the printing press, the ordinary printing techniques of the time, in which ink was simply stamped onto the paper using lead type, produced too poor a result for stylish invitations. However, the tradition of announcing weddings in the newspaper did become established at this time.

In 1642, the invention of metal-plate engraving (or Mezzotint) by Ludwig von Siegen brought higher-quality wedding invitations within the reach of the emerging middle class.[1] Engraving, as the name implies, requires an artisan to “hand write” the text in reverse onto a metal plate using a carving tool, and the plate was then used to print the invitation. The resulting engraved invitations were protected from smudging by a sheet of tissue paper placed on top, which is a tradition that remains to this day.

At the time, the wording of wedding invitations was more elaborate than today; typically, the name of each guest was individually printed on the invitation.
The Industrial Revolution

Following the invention of Lithography by Alois Senefelder in 1798, it became possible to produce very sharp and distinctive inking without the need for engraving.[2] This paved the way for the emergence of a genuine mass-market in wedding invitations.

Wedding invitations were still delivered by hand and on horseback, however, due to the unreliability of the nascent postal system. A ‘double envelope’ was used to protect the invitation from damage en route to its recipient. This tradition remains today, despite advances in postal reliability.
Modern times

The origins of commercially printed ‘fine wedding stationery’ can be traced to the period immediately following World War II, where a combination of democracy and rapid industrial growth gave the common man the ability to mimic the life-styles and materialism of society’s elite. About this time, prominent society figures, such as Amy Vanderbilt and Emily Post, emerged to advise the ordinary man and woman on appropriate etiquette.

Growth in the use of wedding stationery was also underpinned by the development of thermography. Although it lacks the fineness and distinctiveness of engraving, thermography is a less expensive method of achieving raised type. This technique, often called poor man’s engraving, produces shiny, raised lettering without impressing the surface of the paper (in the way traditional engraving does). As such, wedding invitations – either printed or engraved – finally became affordable for all.

Laser engraving has also been making headway in the wedding invitation market over the last few years. Primarily used for engraving wood veneer invitations, it is also used to engrave acrylic, or to mark certain types of metal invitations.